Not every trip has to have a low point, but this leg of the trip was certainly ours.

From the coast we cut inland to explore lava tubes near Mt St Helens. From there we made our way to Cascade Locks, stayed the night there, and headed to the Columbia River Gorge and then into Portland and finally South Beach. 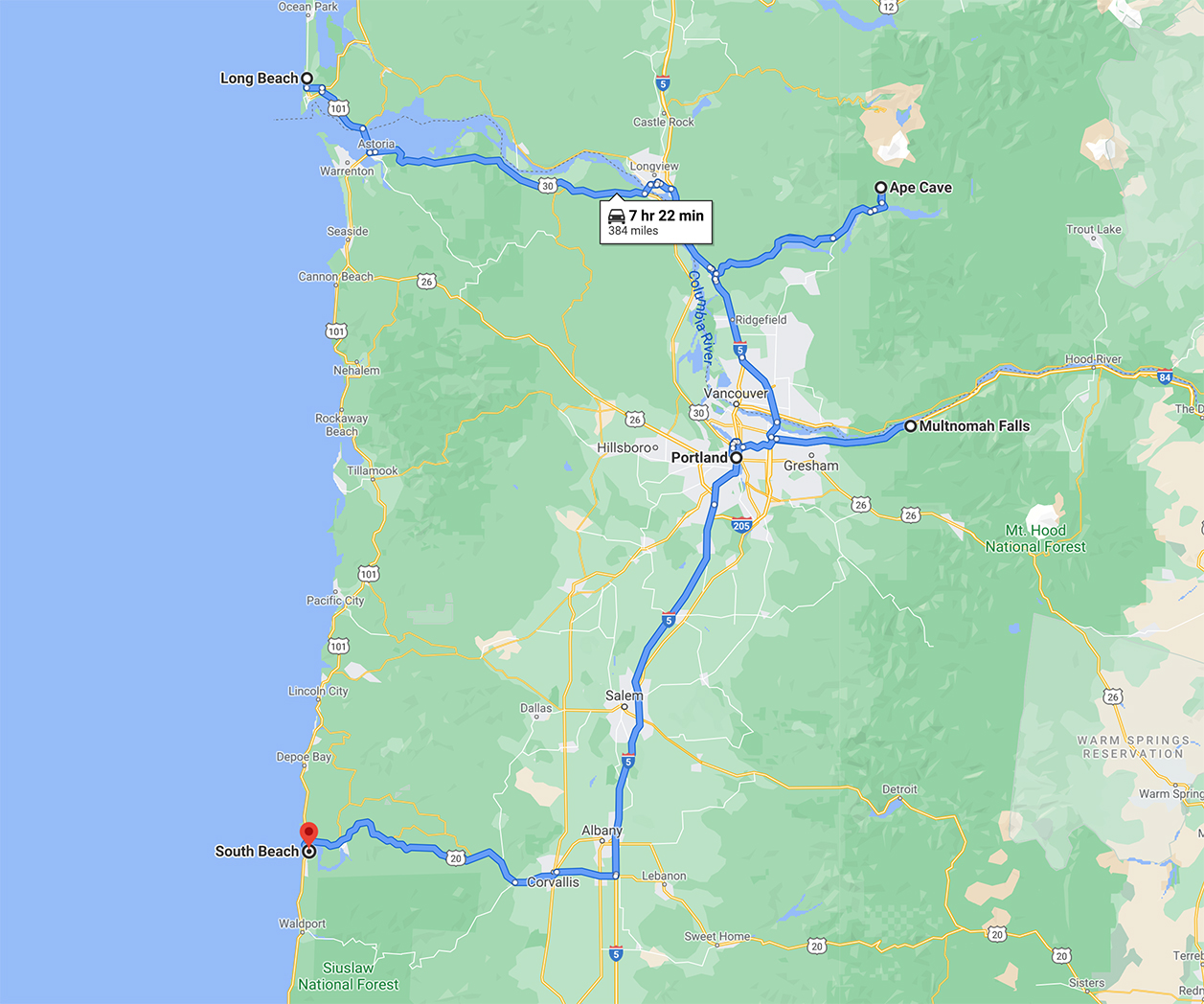 Lava tube explorations! At over 2 miles in total length, this is the third longest lava tube in the continental United States. There are two branches––the upper cave and the lower cave. The adventurer in me wanted to try the longer, more difficult side of the cave, the "upper" portion. However, in weighing everything––multiple large boulder piles to clamber over (27 in total, a number I didn't even know until later), an 8ft lava wall to scale, a metal ladder and over a mile of trail to hike back in darkness, we decided we should probably do the shorter cave. (Not to mention the fact that I was getting sick.)

This shorter portion of the cave is significantly easier (really just an easy walk on a bit of uneven ground). The cave slowly gets smaller as you near the back (just under a mile in distance) before shrinking into nothing but crawlspace (which I started through out of curiosity, just to see how narrow it really got, and it certainly got too small for my taste). Not having a tripod, I set up my camera on large, rocky shoulder as best I could to get some long exposure shots of the group. Taken at the back of the lower cave, these photos show the lower cave at its smallest (to give you an idea of how large these tubes are).

As we backtracked to the cave entrance, I peered to the other, longer and more difficult side of the cave. Just beyond the entrance lies one of the many large rock piles you're required to scramble up. I wanted to see what just one was like, so I semi-convinced the group to try it out. It's a big pile of rocks in a mix of jagged sizes, some sturdy and some that would rock under your weight. Eventually as we scrambled to the top, you could see down to the floor again, which perfectly clears up and looks just like the portion of shorter portion of the cave. From there, somewhere off in the darkness of the tunnel, those that commit to this portion can expect to find almost thirty 12ft piles of lava rock rubble before they can make it up the ladder and out the trail back to the parking lot. 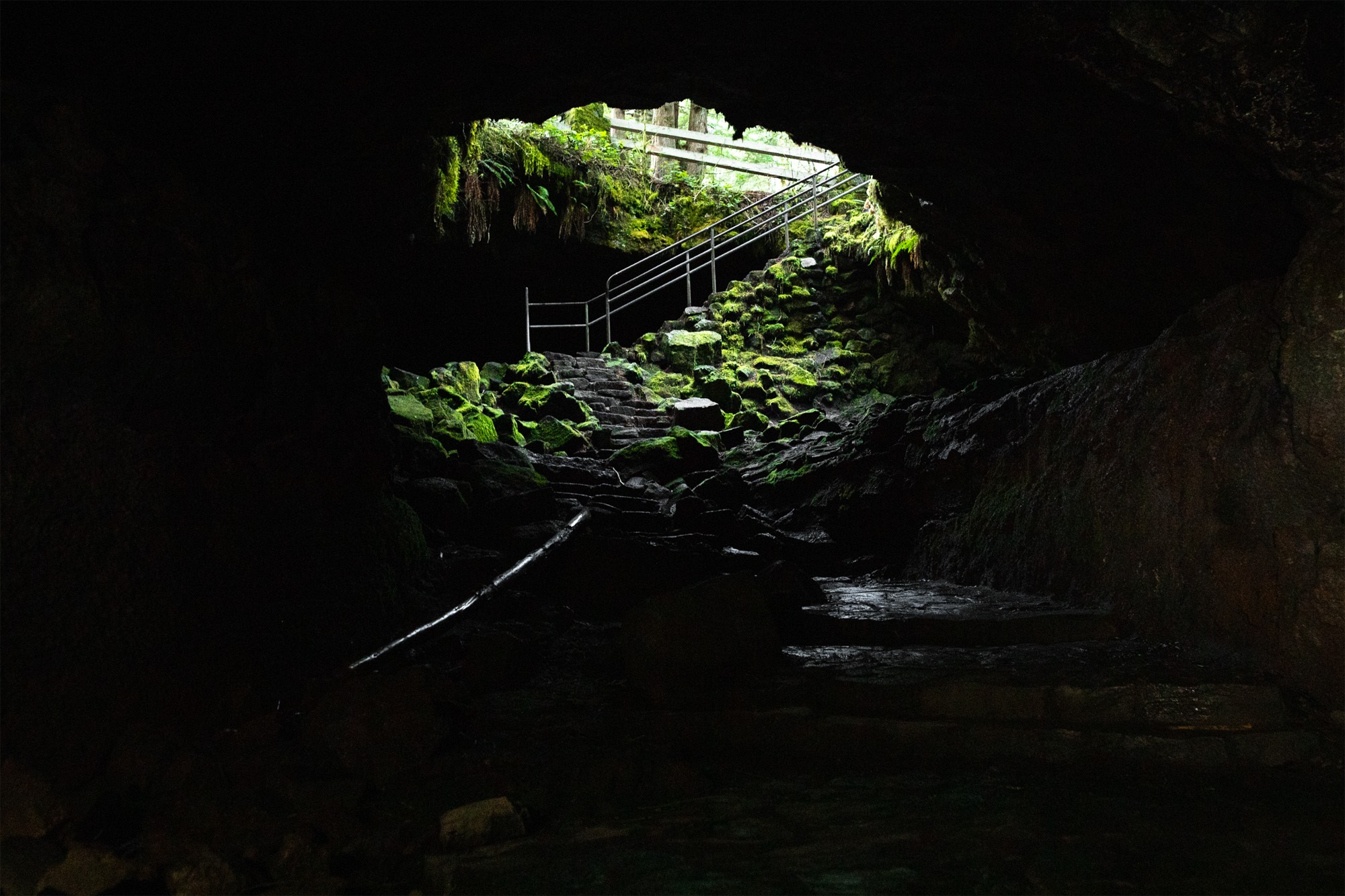 Originally I had us taking the Wind River Highway down from Mt St Helens to Carson and Cascade Locks. In any other time, I'd love to explore the trails and recreation areas all around Mt St Helens and down to the Columbia River, but our timeline didn't quite allow for that. While it would have been nice to glimpse the area (my intention for taking that route down), we weren't going to see much in the dark. We backtracked to the 5 Interstate, got dinner, and headed to that night's AirBnB.

Our place for the evening was positioned right up against the Pacific Crest Trail (would that I could have wandered that trail a bit), which wasn't an intentional choice when booking. We woke early and began packing up the car when, presumably, a neighbor came up to tell us their place had gotten broken into. It was an odd exchange, and I couldn't help but feel she was suspicious of us, even though she said nothing directly. We had little insight to offer––we had heard nothing through the night and our car and cabin were intact as far as we could tell. (Honestly, looking back, this morning was an odd foreshadowing of the evening to come.)

Our next stops for the day, before heading into Portland, where some of Oregon's most amazing waterfalls (I honestly didn't even realize how many of them there were until planning the night before and driving along the day of). That whole road besides the Columbia River is chock full of them, and they're all quite magnificent. We picked only two to stop at––Multnomah (which is probably the "crown jewel") and Latourell Falls. One of us convinced the others to hike the 2.4 mile trail to Upper Latourell Falls. Normally I wouldn't need convincing, but I was feeling pretty miserable (feverish, strong sore throat, running nose, etc––just plain sick, y'know?), but I pushed through because in any other instance I'd be super excited to be out in and able to photograph such a lovely area (and who knows when I'd be back).

So we did the loop. One of us walked into the waterfall (as he intended to despite the 30-something temperature). We saw some pretty cool sights, I got some photos, then we headed out to Portland. 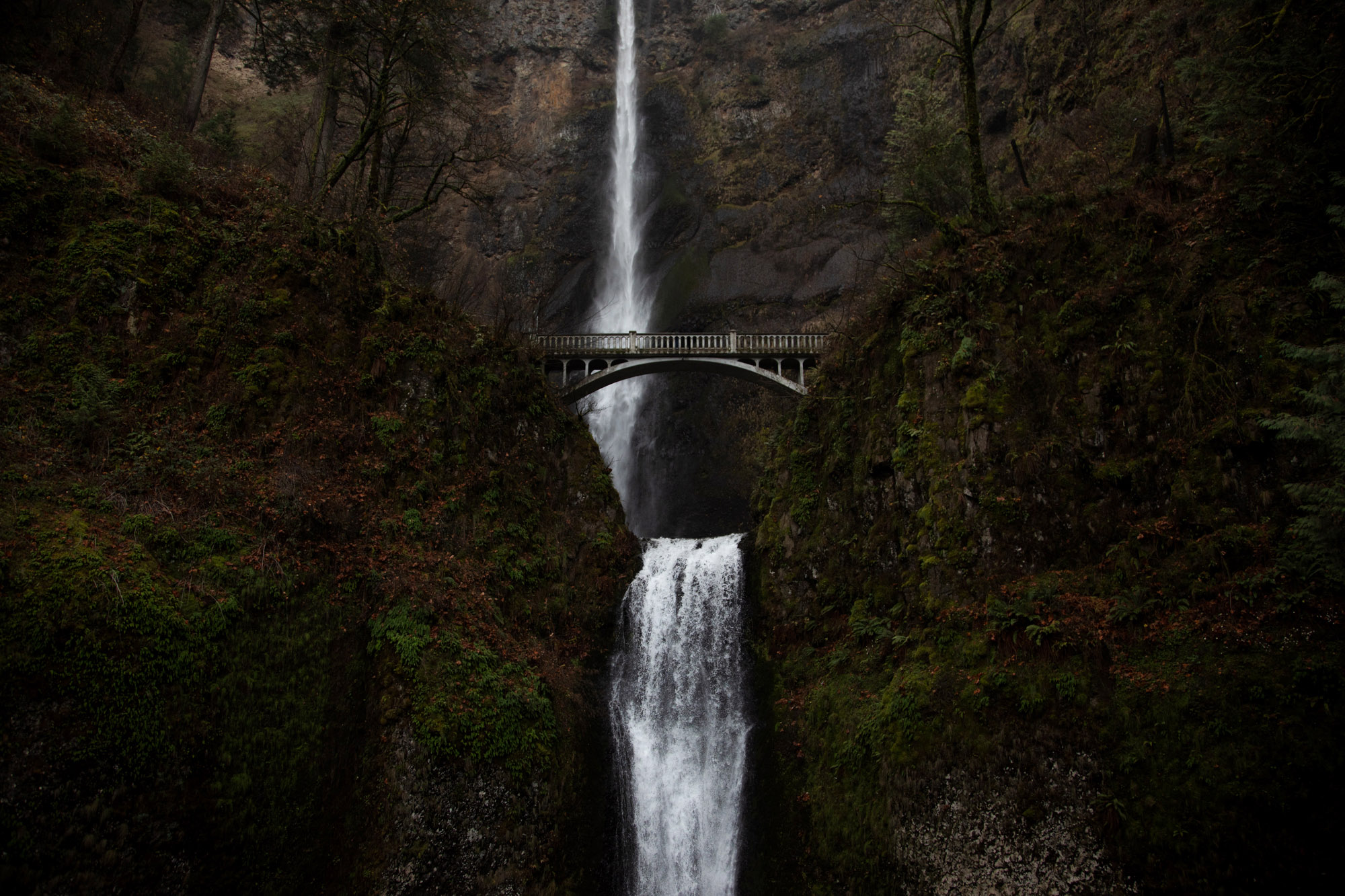 Portland, OR to South Beach, Newport, OR

Our only intention in Portland was to stop at Powell's City of Books, a giant book store (hence the name, honestly). We parked nearby, walked to grab some food, then to the book store, browsed its many floors, and then returned to our car. We came back to a shattered window. Within the hour we were gone (or perhaps less) our car was broken into. Multiple items had been stolen. It was a gut-wrenching moment. I lost my old camera, which I lent out for the trip, but I little comparatively. We sat in that parking lot as night set in, amongst the shattered glass, under a large array of cawing black birds (seriously like a bad scene from a movie), making phone calls and trying to sort everything out––police report, rental car exchange, canceling credit cards.

It felt so strange, standing there. People walked by, cars drove by, but no one stopped, no one questioned. Perhaps no one saw. Perhaps in all the busyness no one bothers to look, yet there you remain, stuck in your dark hour; lost and isolated in an otherwise sea of activity.

It took a while, but we were finally able to locate another rental to switch out for. We drove in silence. We went through the motions of cleaning out our car, loaded up the new one, and left. We still had hours to put in to our next stay. I personally felt in a daze, physically (seriously the worst of my sick days on the trip) and emotionally, and I think it goes without saying that the others were drained too. It was a call from my dad that brought us back to life––he encouraged us to celebrate this moment, in that, none of us were harmed. We're all okay. We're together. We're alive. And he was right. We pulled over for ice cream (frozen yogurt, actually, since it was the nearest thing) and just spent time appreciating our time together. It didn't make all the suck go away, but it helped ground us again.

We finally made it to our AirBnB. The owners were careful in who they let stay, and it was obvious why. There was so much care in its decor, in its overall layout and space, and the location was right on the water. From where (and what) we came from to then, it felt, to me, a bit surreal (probably partially because I was pretty out of it). It felt soothing and safe––a lovely, cherished home. The others went out for a late night run to replace some of the things that were stolen. I tried to wait up for them but passed out on an overly comfy, massive king bed.

I awoke at sunrise despite being pretty exhausted, and decided to peak out at the view across the water. It was an overcast, foggy morning. You could barely make out the water (which also meant that seeing the lighthouse and surrounding beaches I planned for that day was likely out of the question). Yet a relaxed morning on the deck, with the sound of crashing waves below, and a steaming cup of tea in hand felt a perfectly good replacement in that moment. 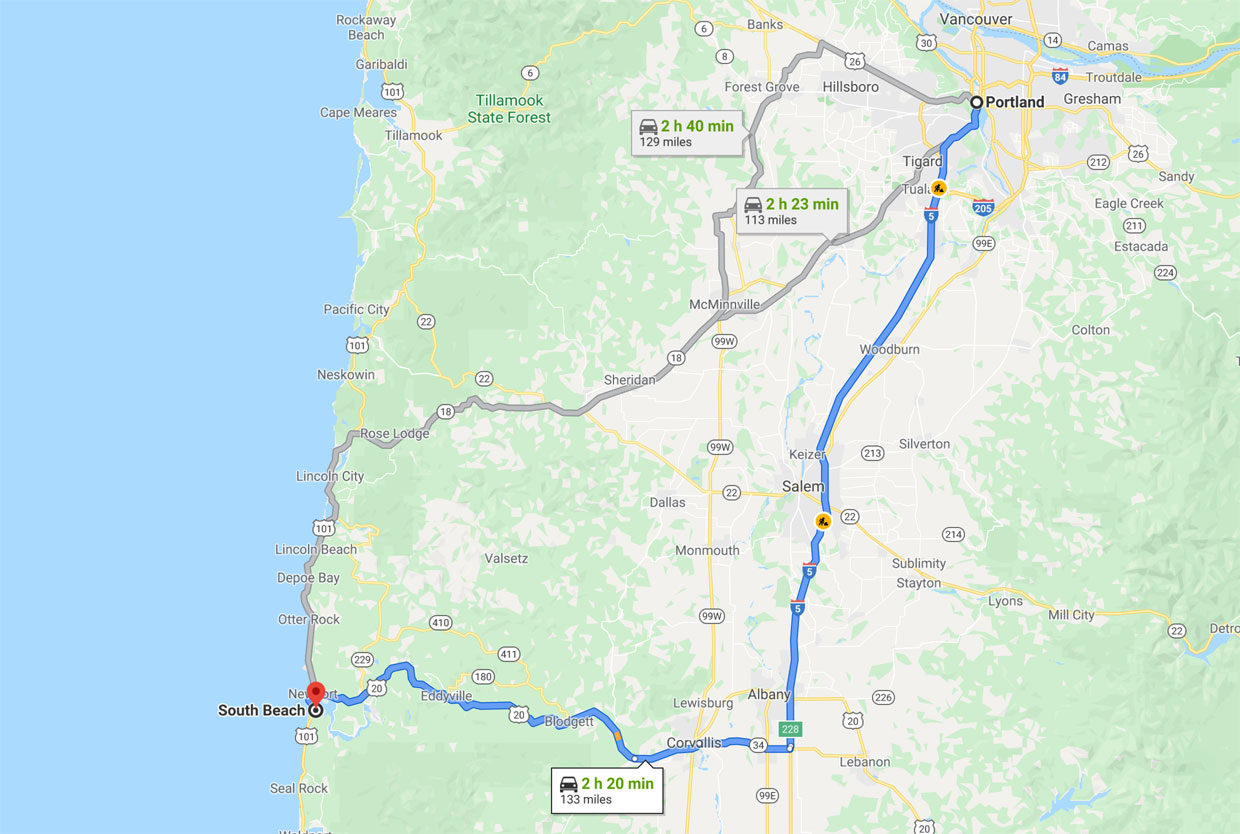